and a survey of Reader's Greek New Testaments

Searching online for the "best Greek New Testament" is kind of a silly exercise. There are essentially four editions of the Greek NT readily available for students and pastors--the Nestle Aland/United Bible Societies ("NA/UBS") edition (two editions with the same text but different apparatuses), the Byzantine/Majority Text edited by Robinson and Pierpont (or "RP"), the Textus Receptus (or "TR," published by the Trinitarian Bible Society), and the relatively-recent Tyndale House/Crossway Greek New Testament ("THGNT"). Of these two, the NA/UBS and MT have been the principle two options for the last century. Each of these has their advocates, and the interwebs contains no shortage of very passionate defenses of each. As with everyone who studies the New Testament and textual criticism (even at the armchair level), I have my preferred text...but that honestly is of very little importance for reading and working often in the Greek.

With that in mind, let's take a more detailed look at some practical options for students of Greek to use as their daily reading New Testament. Fortunately, we have some amazing options available to us!

Let's take a moment and be very honest...most pastors/students/readers will not get to the point where they can read the entire Greek NT without any vocabulary help. There are almost 5,400 unique words in the Greek New Testament. Of that total, nearly 4,300 of them occur less than ten times, infrequently enough that learning and maintaining them is going to be a lot of work for arguably little payoff. As a result, a Reader's edition of the NT is going to be a great benefit for all but a few supreme masters of the language. By having a running list of glosses (i.e. not lexicon or dictionary-length but short definitions) and verb parsing information at the bottom of the page for less-frequently used words, these editions allow you to read large amounts of the text without having to have a companion dictionary/lexicon always at the ready. For learning and retaining a language, this is essential.

In the world of Reader's Greek New Testaments, there are principally 3 options: the Greek New Testament for Beginning Readers (based on RP), UBS Reader's Greek New Testament, and the THGNT Reader's Edition.1 Each of these editions has something unique that makes it worthy of your consideration. Let's take a quick look at each. As a quick note, a review of the strengths and weaknesses of the Greek texts behind these editions is well-beyond the scope of this review, so I point interested readers to the Evangelical Textual Criticism blog, which regularly tackles exactly this sort of technical review.

Where it shines: Because of its 50x running word list and extensive parsing information for every verb form listed in the Greek NT, this edition definitely lives up to its name as the most beginner-friendly Reader's edition, packing everything in a single volume that a Greek learner needs to read large portions of the New Testament. For verb forms alone, it has no equal. Imagine having quick access to the parsing data for every verb in a printed Greek NT. That is a major feat!

Things I would change: My biggest problem with this edition is the binding. It's glued, and mine cracked after only a little use. Comments on Amazon make me think this is a widespread issue, so I hope any future editions fix this problem. Regarding format, the glosses at the bottom are arranged in continuous rows (versus columns), which makes it difficult to quickly find the word you are looking for. Given the number of helps on every page between the parsing information and glosses, putting the information in columns would make this book unwieldy--I completely understand the editor's decision to use the format they did, but it still can be a little slow to find what you're looking for. The margins and line spacing are very tight (also due to the amount of information included on every page), which makes this edition nearly impossible to make any kind of notes in. 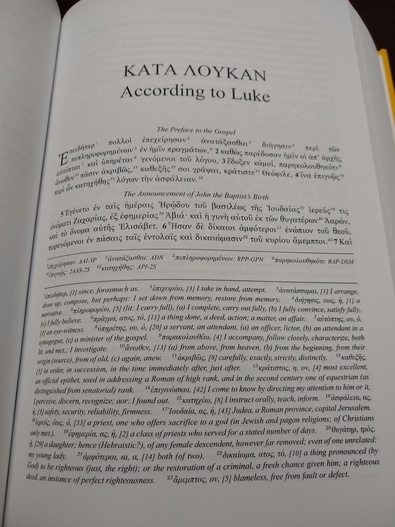 While the Byzantine text is my preferred Greek text, this is my least used Reader's New Testament. It is perfectly suited for students who have had a semester or two of Greek, which is exactly the target audience. With that in mind, this is a great beginner's edition.

2). The UBS Reader's Greek New Testament uses the...wait for it...UBS New Testament text, now on its 5th edition. It is, of course, the same text as the current Nestle-Aland Greek New Testament. This edition has definition glosses for every word appearing 30 times or less. These glosses are deliberately contextual, so the definition listed is based on what the editors think it means in a particular passage instead of trying to give the semantic range for a word. Parsing information is included for each verb included in this frequency range. The body of the text includes English section headings (including Gospel parallels) and puts Old Testament quotations in italics (with cross references). Current editions also present limited textual variant information, though my first edition does not have this feature, so I can't comment on how extensive it is. Finally, words appearing more than 30 times are defined in an appendix.

Where it shines: Because this text does not include glosses or parsing information for as many words, the presentation is able to be make use of columns at the bottom of the page, which makes for a clean presentation that is quick to reference while reading. This edition also has nice margins and line spacing, which allows for easy note taking. Though bracketed, the longer ending of Mark and John's account of the woman taken in adultery (pericope adulterae) are included.

Things I would change: This is the Reader's NT I have used the most, and I have no significant critiques. While I understand the rationale for providing contextual glosses, I prefer non-contextual definitions, which puts more responsibility on the reader to learn the range of semantic values and apply them appropriately. The font is nice and large, though it is not as clear to me as the THGNT font, but this is surely a very minor issue. 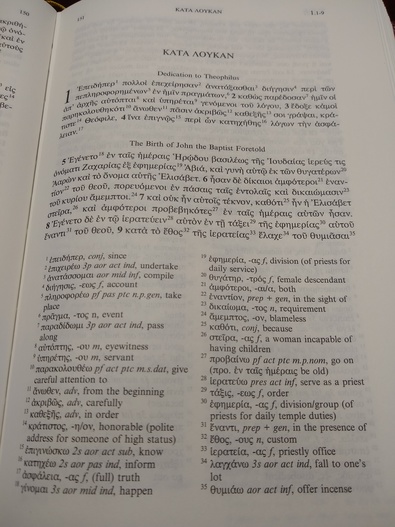 3). The Tyndale House Greek New Testament, Reader's Edition, rounds out this list. It is the newest entry. This edition uses the relatively recent THGNT. This edition contains non-contextual glosses and parsing information for every word appearing 25 or fewer times as well as additional parsing information for uncommon or potentially confusing verb forms. There is an appendix with definitions for words appearing more than 25 times and another appendix linking "surface forms" (i.e. the in-text spelling) to the lemma (i.e. dictionary form) for all words aside from proper nouns that do not have footnoted information in the main text. This unique addition allows readers who may be confused about a form to find the dictionary form of a word to prompt their memory or allow them to look it up in the glossary.

Where it shines: Like the UBS edition, the Tyndale House edition puts glosses and parsing information in columns at the bottom of the page for quick reference. Though the font size is a little smaller than the UBS edition, I personally find it more clear and easier to read. This edition has the largest outer and inner margins to allow for note-taking. The surface forms to lemmas appendix has proven incredibly handy to remind me of inflected forms that don't look familiar at first glance. Even if everything else was equal across these three editions, which it isn't, this appendix alone would make the THGNT the most useful to me and my favorite choice. Of the three editions I own, this is my favorite for reading, which is the whole idea of a Reader's edition. The presentation is the cleanest and most pleasing to the eye.

Things I would change: I have just one major critique of this Reader's NT. The standard edition of the THGNT puts the pericope adulterae in a footnote, showing that the editors question whether or not these verses are original. While this is fine for the normal edition, these verses are entirely absent from the Reader's edition without even so much as a footnote's worth of explanation. I hope future editions will consider including it, even if it appears as a footnote. This passage is too important to leave out altogether! 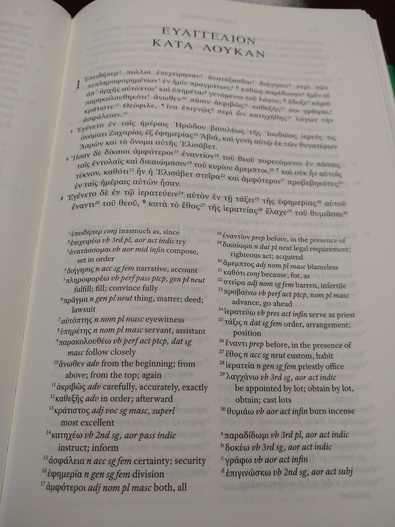 Closing thoughts: It is a good problem that we have 3 great Reader's edition Greek New Testaments to choose from. Each of them has strengths and imperfections, but all of them are worthy investments for the Greek student and pastor. With such wonderful options to choose from, gone are any excuses pastors may want to use as to why we are not studying our New Testaments in the God-given Greek. More than that, any Christian who wants to labor in the Greek NT can have, in a single volume, enough helps to wade into the text with confidence. With that in mind, dear brothers and sisters, let us dive in and keep reading!