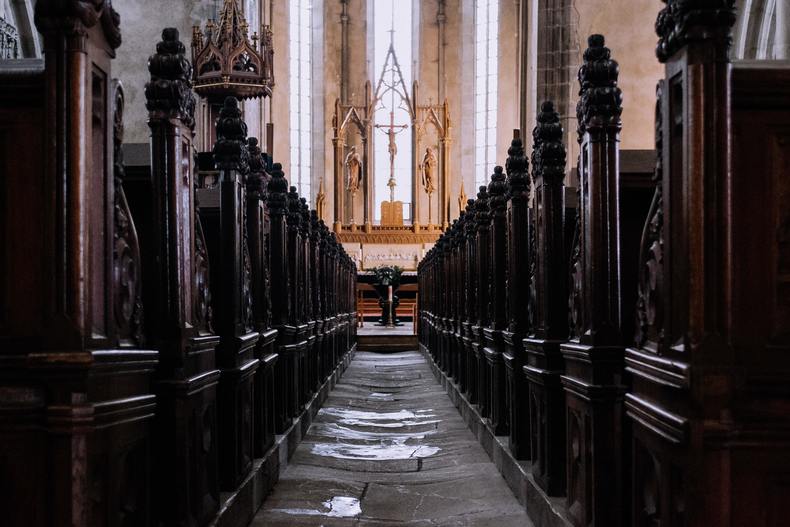 STIR up, we beseech Thee, Thy power, O Lord, and come; that by Thy protection we may be rescued from the threatening perils of our sins, and saved by Thy mighty deliverance; Who livest and reignest with the Father and the Holy Ghost, ever one God, world without end. Amen.

Now when they drew near Jerusalem, and came to Bethphage, at the Mount of Olives, then Jesus sent two disciples, saying to them, “Go into the village opposite you, and immediately you will find a donkey tied, and a colt with her. Loose them and bring them to Me. And if anyone says anything to you, you shall say, ‘The Lord has need of them,’ and immediately he will send them.”
All this was done that it might be fulfilled which was spoken by the prophet, saying:

“Tell the daughter of Zion,
‘Behold, your King is coming to you,
Lowly, and sitting on a donkey,
A colt, the foal of a donkey.’ ”

So the disciples went and did as Jesus commanded them. They brought the donkey and the colt, laid their clothes on them, and set Him on them. And a very great multitude spread their clothes on the road; others cut down branches from the trees and spread them on the road. Then the multitudes who went before and those who followed cried out, saying:

“Hosanna to the Son of David!
‘Blessed is He who comes in the name of the LORD!’
Hosanna in the highest!”

Today's Gospel reading doesn't sound like it has anything to do with Advent or Christmas, at least not at first glance. Upon further reflection, however, it has everything to do with the coming of the King as it is the fulfillment of an ancient prophesy about the Messiah. While we usually do not link Jesus' first and second comings in our minds, we cannot really separate the two since the second culminates and fulfills everything that was begun during the first.

During the time of the prophet Zechariah, whose words Matthew quotes, Israel longed for their coming King. The kingdom had been divided, conquered, and resettled. The temple was being rebuilt but would ultimately be a disappointment. Before long, the voices of the prophets would fall silent, God's promises seemingly unfulfilled and forgotten. By the time of Jesus' birth, hundreds of years later, despair and doubt would be the prevailing emotions of the day. Sound familiar?

As we begin another church year and another trip through the season of Advent, let us not hasten too quickly to the manger. Let us find ourselves in the desperate waiting of Israel. As our songs mimic those of two thousand years ago, let us take comfort knowing that we are not the first to question God's timing, the first to doubt his providence, or the first to consider the reasonableness of our faith. God's promises have not failed before nor will they fail in the future. Despite outward appearances to the contrary, let us remember the celebration of recent weeks when we considered the reality of Christ's Lordship, even when it seems he is hidden from sight.

This is the promise of Advent, but we must wait for it.

Photo by freestocks on Unsplash