finding God where he promises to be found 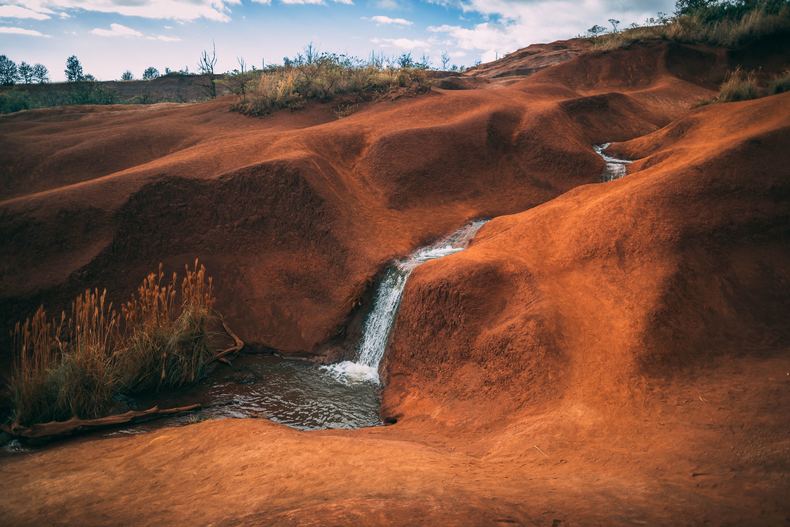 Today's Old Testament reading (2 Kings 5.1-19) is one of my absolute favorite accounts in the Old Testament. In it we are reminded of several essential truths that tend to run counter to our own thinking about how God should behave and work. For this reason...

First, we learn that we may find God precisely where he promises to be found. In this account, Naaman is disgusted and angered by God's command through Elisha to wash in the Jordan river. Even though God has graciously promised to heal Naaman of leprosy (a practical death sentence in his day) based on absolutely nothing Naaman did or deserved, he can only focus on how stupid it all sounds. "Dip myself in the Jordan River? Seriously? That filthy, nasty river? Why not the pristine beautiful rivers of my native Syria?"

If anyone ever entirely missed the point, it was Naaman. God promised to cleanse him, entirely by grace, in the waters of the Jordan. God promised to be found in that river, humble and unappealing though it appeared (perhaps Naaman was biased!). But Naaman would have none of it. Where was the drama? Where was the glamour? Where was the spectacular? Poor Naaman. Thankfully for him, he listened to his servants when he would not first listen to God's prophet. He returned to the Jordan, dipped himself in it, and was made whole. God met him precisely where he promised to meet him.

Could God have healed Naaman in the Abana or Pharpar rivers in Syria? Of course! Would God have had pity of Naaman and healed him if he, in his weak faith, chose to wash himself there? Maybe. No one knows. Because God did not promise to meet Naaman there. We can say with certainty that we shall find God, healing, and salvation where he has promised us--he has detailed this in his word--but we cannot say with certainly that God will meet us anywhere that he has not explicitly promised.

Specifically, God has promised us forgiveness and eternal life by faith through the waters of baptism, through the body and blood of the Christ in the Lord's Supper, and through the hearing and teaching of his Word. We can know with complete confidence that we will find God and his gifts there because he has promised us. But we cannot know that we can or will find God in mystical experiences, in rituals of our own creation, in the woods, on the golf course, or anywhere else because he has not promised us this. What you experience in these other places may indeed be God--for he certainly can work anyplace and any time--but it may also be the side effects of yesterday's bad fish, the impulses of our own deluded minds, or the devil himself. Only where God has promised to be may we be certain to find him.

The other beautiful truth of this account is that God promises to work in the ordinary, earthy, mundane things of life and creation to bring salvation to his people. For Naaman, cleansing, wholeness, and salvation were brought through the ordinary and unexciting means of water. The early church didn't miss the obvious picture (foreshadowing) of baptism here. Similarly, spiritual cleansing, wholeness, and salvation comes to us through the means of water in our baptism (1 Pet 3.21-22). Continued grace, healing, and forgiveness come to us regularly also through the Lord's Supper / Eucharist in the very ordinary elements of bread and wine. Through some of the most basic parts of creation--water, grain, fruit--God brings grace to us in ways we can see, hear, taste, smell, and touch, exercising all our senses to cling tangibly to his word of promise.

What's the lesson here for us? In our Western culture that is infatuated by the sensational, the spectacular, and the over-the-top, let us be reminded of where God has promised to meet us...in the ordinary, mundane, simple sacraments he has given us. In our American Christian culture that has bought in to our culture's values of flashy, dramatic, and ever-bigger, let us be reminded that God did not speak to Elijah (just a few chapters before) in the amazing display of the rock-splitting thunderstorm, earthquake, and fire but in a soft whisper, a thin silence that was arguably anything but awesome in its presentation.

We can always find God where he promised to be. Go look, taste, and see.

Photo by Roberto Nickson on Unsplash