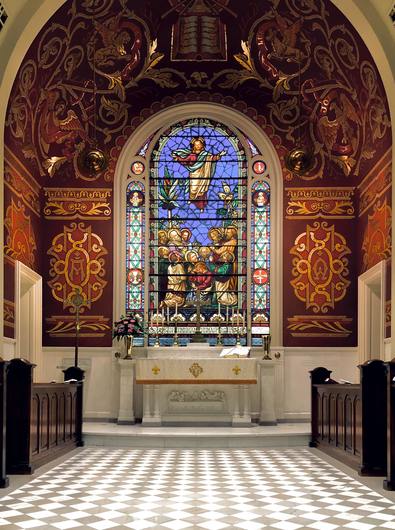 O King of Glory, Lord of Hosts, Who didst this Day ascend in triumph far above all heavens; We beseech Thee leave us not comfortless, but send to us the Spirit of Truth, promised of the Father; O Thou, who, with the Father and the Holy Ghost, livest and reignest ever one God, world without end. Amen.

So then, after the Lord had spoken to them, He was received up into heaven, and sat down at the right hand of God. And they went out and preached everywhere, the Lord working with them and confirming the word through the accompanying signs. Amen.

Forty days after his resurrection, Jesus ascended to the right hand of the God the Father. Though we do not see him, God has not left us to ourselves, for we have the 'forever' promise of the Holy Spirit with us and in us (John 14.16). Moreover, the Father continues to hear and answer our prayers, and Jesus continues to come to us in the Sacrament of his body and blood. The entire Trinity is active in our salvation each and every moment of the day! Looking forward, we also take comfort in knowing that when Christ comes back again on the Last Day, we are sure to share with him in his glory. Amen and amen.

A hymn of glory let us sing;
New hymns throughout the world shall ring;
By a new way none ever trod,
Christ mounteth to the throne of God.

May our affections thither tend,
And thither constantly ascend,
Where, seated on the Father’s throne,
Thee, reigning in the heavens, we own!

Be Thou our present Joy, O Lord,
Who wilt be ever our Reward:
And as the countless ages flee,
May all our glory be in Thee!

Photo by Joshua Eckstein on Unsplash